Blackpool recorded their third consecutive win with a thumping 6-0 win over visitors Ipswich Town, marking the first time ‘Pool have begun a campaign in such a fashion since 1991/92. However, the scoreline does not perhaps tell the whole story. Here are my thoughts on the match:

1. Back to front first half

Ian Holloway’s post-match interview on local radio wasn’t what you might have expected in the aftermath of a resounding 6-0 victory, but it showed a manager in the peak of his powers and prepared to avoid getting carried away. The bold comment was that he felt he got his tactics wrong and that he should have changed his team from the one that faced Leeds four days prior. Based on the opening 45 minutes on Saturday, there’s an argument to suggest he’s right.

Having thoroughly outclassed Neil Warnock’s side on Tuesday night, ‘Pool began slowly against the Tractor Boys, and on the balance of play not only were Ipswich unlucky to be behind at half-time, they played marginally the better football and had more of the possession. Former loanee Jay Emmanuel-Thomas was often the target of long diagonals played into wide areas from which he looked a threat, and Ipswich were quick to pick up the loose balls in midfield with high pressing.

For their part, Blackpool were forced into going long too often, failing to play through the midfield as they had done in the opening two games. Yet perversely it was Ipswich’s failure to deal with a routine clearance which led to the opening goal. Stephen Crainey’s long ball was headed into the path of Tom Ince by defender Tommy Smith – Ince’s excellent first touch allowed him to sweep into the area and put the ball in the corridor of uncertainty prompting Aaron Cresswell to convert into his own goal.

Ipswich would have been disappointed enough going in at 1-0 down, but Gary Taylor-Fletcher’s goal on the stroke of half-time did not provide a fair reflection of the match to that point. Yet Blackpool are in ruthless form right now, and when they’re not at their best, opponents need to make the most of it.

If Paul Jewell’s side were disheartened with the score at half-time, then Blackpool’s third goal just four minutes after the break killed them completely. Ince was once again at the heart of it, this time scoring goal himself rather than laying on for someone else as he had twice in the first half. As soon as it the ball hit the back of the net, you saw the Ipswich heads drop almost instantly, and from that point on, it was always going to be a question of how many.

Ipswich, of course, do have form for the spectacular collapse. Last season around this time of year, Jewell’s side were on the wrong end of a 7-1 scoreline away at Peterborough, in front of the Sky cameras too. They weren’t anywhere near as bad at the weekend as they were at London Road a year ago, but their propensity for buckling should nevertheless be a worry for Jewell, with many of his players visibly losing their heads, Lee Martin in particular.

As for Blackpool, they look like a side very capable of leading games and seeing them out, something of a contrast to recent years when the final 15 minutes of games while in front would often result in bitten fingernails. When this Holloway side get their tails up, the passing is a joy to watch and they really begin to make the opposition tire and chase the ball. Leeds learnt that going in front against the Seasiders can inspire ‘Pool to attain their best, while Ipswich saw how hard it is to come back against Blackpool. For Holloway, the early signs are exciting.

Full-backs of the Championship watch out…Blackpool are coming for you. Given the early season form of Tom Ince, it’s no secret that ‘Pool are looking dangerous from wide positions, but many of the 10 goals scored so far this season are uncanny in their likeness. All of Blackpool’s six goals on Saturday came from wide areas of some sort, but the left side is a particular strength. Despite often starting on the right as an inverted winger, Ince is at his most dangerous on the left of the 18 yard box, as illustrated below: 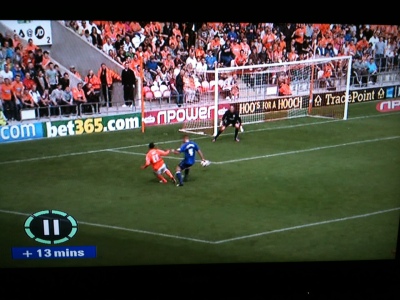 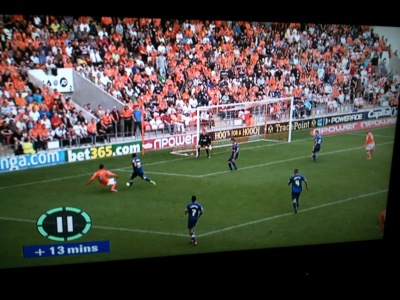 Both goals against Leeds also came from this area, with another Ince assist and one from Crainey, while Ince’s first goal at Millwall involved in the former Liverpool youngster playing a one-two with Tiago Gomes in this position. Right-backs in particular will need to be at their best to keep Blackpool out this season.

The overloading of teams on the flanks is perhaps due in no small part to the lack of a typical target man in the number 9 position. So far Kevin Phillips has started every league match this season, and with his size he is not the sort of the player to win headers; rather Phillips is being asked to come short and link up play with his feet, pushing the ball out to wide areas for Blackpool to overwhelm the opposition – a job the veteran has done well with little acclaim.

If Blackpool’s prowess out wide continues, then it is surely only a matter of time before teams begin to double up in these areas, yet it is often the pace at which ‘Pool break which makes it so hard to defend. If Matt Phillips chooses to commit to the Seasiders, for the short term at least, then the goals from the wide parts of the pitch should continue to flow.

With the size of the squad, it is thought that Ian Holloway potentially has a difficult balancing act on his hands this season. Holloway has said as much himself, stating that he’s got “the biggest headache I’ve ever had”. Proof of this can be seen by listing some of those who didn’t even make the bench: Bob Harris, Chris Basham, Elliot Grandin, Scott Robertson, Tom Barkhuizen are all players who might expect to feature at some point this season, yet were unable to make the matchday 18. Yet scratch below the surface, and how hard was Holloway’s selection dilemma for the Ipswich game? Matt Gilks’ only competition is the inexperienced Mark Halstead, while the only change that could possibly have been made in defence would have been to bring back Ian Evatt for Craig Cathcart – Holloway obviously decided that Evatt would benefit from more recovery time. Up top, uncertainty still surrounds Matt Phillips making it perhaps awkward to hand him a start.

Elsewhere in midfield and forward areas, the side that started the league season have done so well it is hard to leave them out. One change I did anticipate against Ipswich was to rest Kevin Phillips for Nouah Dicko, but I can see the logic in not having done so. Going back to the manager’s view that he got his team wrong at the weekend and should have freshened it up, a week’s gap between the 6-0 win and the trip to Leicester means it’s entirely possible the same team could start again having had chance to rest and recuperate – the whole squad was given Sunday and Monday off.

A strong squad will be needed over the course of the season – those who cite the three back-to-back wins as evidence of no further strengthening being needed or injured players being missed rather miss the point of having a squad – yet in the here and now the team is making it very easy for Holloway to justify sticking by his decisions.