Throughout last season I analysed the relative difficulty of Blackpool’s fixtures based on a system devised by the brains over at Experimental 3-6-1 – the season visualiser. For the most part the visualiser held up pretty well and was a good way of tracking progress during the course of the campaign.

I’m pleased to announce that the visualiser will once more be a regular feature on the blog this season, with thanks due again to Ben Mayhew (@experimental361) for providing the raw data which allows me to manipulate the figures into various charts and graphs.

Regular readers of this here parish should be pretty familiar with the visualiser by this point, but for the new ones amongst you, here is the crux of how the visualiser works, as written over at Experimental 3-6-1:

Just like last season, you can view the whole of the Championship visualiser on Experimental 3-6-1, but here I’ve isolated Blackpool’s fixtures to make things a little clearer.

Analysing the visualiser one fixture at a time can prove a little difficult, due to the sheer number of different colours that hit you at once. However, a cursory glance shows that most of theoretically hardest and easiest games take place at either end of the season, with the period from October to January mainly consisting of matches of an average difficulty. Taking the difficulty of each month into account, the below chart makes for interesting reading.

August provides the Seasiders with a relatively kind start before a sustained period of medium difficulty months. The second half of the season could offer more opportunity for points with February, March and April all a green shade. May is an obvious outlier containing only one fixture, the trip to play Bolton at the Reebok Stadium.Explanation of the above. Displaying this same information in graph form provides a slightly better overview.

August is technically the easiest month of the season according to the visualiser, before Blackpool enter a tougher September. The next two months both get slightly easier, before dipping into harder territory again in December and January. February should bring ‘Pool some comfort at the end of the winter period and both March and April are fairly friendly too. As one of the hardest fixtures, the away match at Bolton unsurprisingly sees the graph drop off a cliff. Ian Holloway will be hoping this is not indicative of how his team’s season might end.

In a new feature this season, Experimental 3-6-1 has presented the data in a slightly different way which uncovers an extra level of detail – a lattice view. In this format, the fixtures are grouped by their relative difficulty as follows (again, over to Ben…):

So then, how does Blackpool’s season looks like in this form?

The supposed hardest five fixtures are relatively well spaced out across the season. The away trips to Leicester, Cardiff, Wolves, Blackburn and Bolton are the ones to fear according to the visualiser. Meanwhile, the five games illustrated with a big green dot are alleged home bankers against Barnsley, Millwall, Bristol City, Peterborough and Crystal Palace – interestingly all of these are in the second half of the season.

As with last season, I have used the raw data to create a table of points targets. Using the numbers behind the colours, we can form a weighted table for points targets at the end of each month. The table below takes into consideration the supposed relative difficulty of each fixture and offers a points target that Blackpool should be looking to hit, based on one of three end of season outcomes: survival, a play-off place or automatic promotion. The targets have been set at the generally accepted average points totals required for each of the three landmarks. For example, to be on course for a top two place at the end of November, ‘Pool should be aiming to have accumulated 35 points. 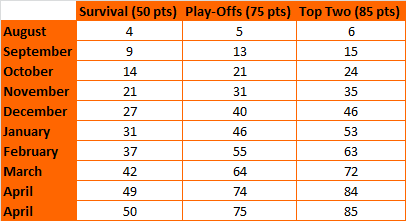 As with last year, I’ll be revisiting this post throughout the course of the campaign to see what conclusions can be drawn and chart progress.