Skip to content
Another home match against a top team, another plucky effort without any reward. It’s hard to argue against Arsenal being worthy winners – the Gunners could have had a five or six goal advantage in the first half alone – but had key moments gone the other way, the end result could have been different. As it was, Arsenal kept 11 men on the pitch, Lee Mason failed to give a stonewall penalty and Keith Southern failed to properly connect with a free header from six yards out. Blackpool can take heart from the way they rattled Arsenal early in the second half, but ultimately ‘Pool contributed to their own downfall.

In terms of where Blackpool went wrong, Zonal Marking covered it pretty succinctly. A suicidally high defensive line was begging for trouble against an Arsenal side who exploit space so masterfully. When combined with a relative lack of pace in the Blackpool back-line, the Gunners had free reign and but for some profligate finishing and the woodwork, Arsenal would have been out of sight by half-time. The still below is just one example of Robin Van Persie getting in behind the ‘Pool offside trap, but it still didn’t prevent Ian Evatt and Alex Baptiste raising their arms in vain. 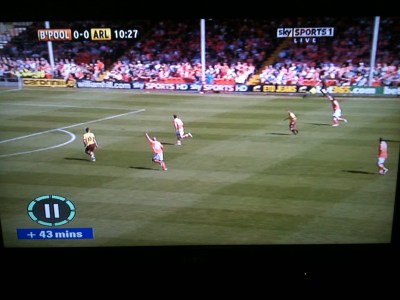 In the build-up to the first goal, ‘Pool were undone in similar circumstances. However, on this occasion while the Blackpool defenders were ball-watching, Abou Diaby was allowed to stroll in at the back post for a simple tap-in. It could be argued that Diaby’s run should have been tracked by a midfielder, but Ian Evatt failed to look over his shoulder once and this will surely have been looked at in the team post-mortem.

Trying to look for positives, January signing Jason Puncheon once again impressed. This time rather than playing in the forward three, he occupied the advanced midfield role typically belonging to Elliot Grandin. Of all the January signings, it is Puncheon who has shone where the others have disappointed. Ian Holloway is likely to have a battle on his hands to retain his services in the summer, as his performances have no doubt alerted other teams to his ability. In this game Puncheon showed his versatility by slotting in neatly for the absent Grandin. Puncheon got around the pitch well, and as the chalkboard below shows, achieved a high pass completion rate.

The on-loan Southampton man also displayed a cutting edge with an incisive pass to DJ Campbell in the build-up to Blackpool’s goal. However, despite the positives in Puncheon’s performance, there are still raw edges to Puncheon’s game. While the Seasiders started strongly and pressured the visitors in the first 10-15 minutes, Puncheon gave the ball away and within seconds ‘Pool were a goal down. The chalkboard below illustrates this.

All in all this was not a game Blackpool were expected to take anything from. The previous day’s results had almost turned this into a ‘freebie’ of sorts, with anything being a bonus. The three home games to come will likely decide the Seasiders’ fate, but ‘Pool can learn from this defeat in both a defensive and attacking sense. Not all Premier League attacks are as quick or as clever as Arsenal’s, but this is a cautionary tale in operating such a high defensive line and may cause Holloway to rethink that strategy.
In a more optimistic light, Blackpool continue to score goals at home, having done so in every league game since August ’09 and if this record can survive until the end of the season, ‘Pool have a great chance of retaining their top flight status. Of course, the odd clean sheet here and there would make this task a whole lot simpler. Fingers crossed ‘Pool can get that particular monkey off their back in a few days time at home to Wigan.