Skip to content
As we approach the so-called business end of the season, it’s time to reflect on the past month and look forward to what the end of the season has in store. In the last periodic review, I questioned whether, as the media were indicating, ‘Pool were on a slippery slope towards danger. Going into February Blackpool were in 12th position on 28 points with a six point gap on the relegation zone. I posited that defeats in both of the ‘six pointers’ against West Ham and Wolves would be the worst case scenario, but whilst this obviously has not helped the Seasiders’ league standing, a win and a draw from the month did at least halt the slide and has ensured ‘Pool still have a cushion of four points on the bottom three.
Rather than look at the remaining 10 games in separate tranches, I’ve decided to view the run-in as a whole. We’re also at that crucial part of the season where other teams’ results can have a significant bearing on Blackpool’s season, so the below chart shows not only ‘Pool’s run-in, but those of their rivals too. The fixtures have been split into home and away and offers the chance to compare the relative difficulty of the sides’ final matches. Which teams to include was up for debate, but I’ve chosen to pick out the current bottom eight sides, up to and including Fulham in 13th. Stoke, Everton and Aston Villa could feasibly be added into the mix, but given their current position and the strength of their respective sqauds, it’s hard to see any of those three making the drop barring a complete catastrophe. 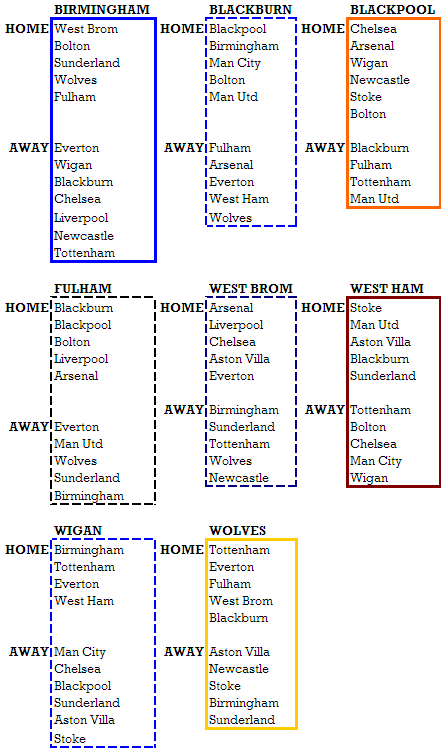 Seasiders in the spotlight
Focusing on Blackpool initially, the clear advantage over other clubs is the number of home games left. The Seasiders have six matches to play at Bloomfield Road, more home matches than even Birmingham who have two games in hand on the rest. The next two games on home turf (what little of that remains on the Bloomfield Road pitch) are about as tough as they get, but victories against Liverpool and Spurs, as well as the performance in the late collapse against Man Utd, should give Ian Holloway’s side hope of causing an upset.
The four other home fixtures look eminently more winnable however, specifically the three consecutive home games towards the end of April, against Wigan, Newcastle and Stoke. If ‘Pool are to win any of their remaining games, then the home match against the Latics is probably the most likely candidate. Meanwhile, Newcastle and Stoke could have very little to play for other than mid-table obscurity by the time they visit the Fylde Coast, the same also applying for Bolton’s trip to Bloomfield Road in mid-May.
On the road, the best two chances to get some points on the board come first with fixtures at Ewood Park and Craven Cottage. Trips to White Hart Lane and Old Trafford offer little encouragement in terms of away points, although it’s to be hoped that the men in tangerine will have completed the task in hand by that point.
Six-Pointers
Whether ‘six point’ clashes are as valuable as is often made out is a widely debated topic, but if proof were ever needed of their significance, one need only look to the game at Molineux last week. A win for the Seasiders would have created a 10 point gap to Wolves – surely unassailable at this stage of the season – but a 4-0 thrashing saw the Wanderers close to within four points of Blackpool. Of the bottom eight teams, the table below reveals how many times each side has to play a fellow struggler. 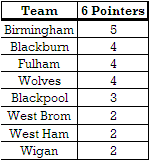 Of their 12 games left, Birmingham have five of the bottom eight still to play. At the other end of the spectrum, West Brom, West Ham and Wigan only have two relegation clashes to face each. ‘Pool have three such fixtures, comprising the away ties at Blackburn and Fulham and the Wigan match at home. On paper the theory should be that the higher the number of fixtures against teams at the bottom the better, but this isn’t always the case. Victories are huge in these games, but defeats inflict massive damage. Among the relegation candidates, Birmingham have the best record against bottom half teams, averaging 1.41 points per game – Alex McLeish will therefore be confident of getting out of trouble if they can maintain their record.
In Blackpool’s case, Holloway’s side have a poor record against sides in the bottom half of the table, notching only 13 points from 15 games against bottom half opposition. This is the second worst record in the league – only Wolves fare worse, picking up a measly nine points in 12 games against sides from 11th down, three of those coming last week against ‘Pool.
Adopt a second team!
While there are eight (and potentially more) teams in the relegation battle, other Premier League sides will inevitably have their say when it comes to who ultimately suffers relegation to the Championship. The results of these teams could have a big impact on the final standings at the time of the season when fans form a special bond with teams they wouldn’t ordinarily care about. For Blackpool, two such sides will be Everton and Sunderland, both of whom have six fixtures against teams from the bottom eight. Aside from Blackpool, Everton have to play everyone but West Ham, while Sunderland must play everyone but Blackburn.
Fulham and Blackburn fans will be rooting for Spurs, who have to play the remainder of the bottom eight between now and 22nd May. Bolton and Chelsea will also have a large say in the relegation battle as those two sides each have five games against the relegation strugglers. Of course, Blackpool must concentrate on getting points themselves before relying on others, but other teams are likely to benefit from an extra backing of the tangerine persuasion for the rest of the season.
Favourites for the drop?
With the league proving so unpredictable this season, it’s hard to say who will be relegated come the end of May. However, in carrying out the research for this post, I do feel compelled to make some predictions at least. As the side currently occupying 20th position, it’s hard to see past Wigan, especially given their dearth of home games – only four. Wigan’s away form has actually been  marginally better than their form at the DW Stadium, but aside from their visit to Bloomfield Road they face some tough away fixtures. Roberto Martinez will need a miracle to survive.
The other obvious candidate is West Brom. Their remaining home games all look tricky for one reason or another, and a side that holds the second worst away record in the Premier League will need to perform at the Hawthorns. The decision to replace Roberto Di Matteo with Roy Hodgson was a strange one, and it remains to be seen what impact the former Liverpool boss can make in such a short space of time. Failure to win any of their last three home games against Wigan, West Ham and Wolves could have sealed their fate.
The final relegation place is a little trickier to predict, and could be any one of the other five. Wolves and West Ham are in the relegation zone as things stand, but an upturn in the Hammers’ fortunes and a kind set of fixtures for Mick McCarthy’s side could see both escape. Birmingham too will be hoping to make the most of their run-in and their Carling Cup success could give them extra belief to see them over the line. Blackpool and Blackburn both have downward momentum, while Fulham have been drawn back in – Mark Hughes’ team have not won since 2nd February.
Blackpool’s prospects
Above all, in Blackpool’s battle against relegation, the current gap they have to the drop zone should not be underestimated. It’s true that things haven’t been going ‘Pool’s way of late – poor form and suspensions to Charlie Adam and DJ Campbell have made things tough for the Seasiders – yet in spite of all this, the teams below them have failed to really capitalise. ‘Pool took a disappointing four points out of a possible 15 in February, but their lead was cut by only two points in that period.
In terms of a points target, the traditional 40 point barrier seems a fair one. The teams in the bottom three are averaging at most a point a game, so 40 should be ample, with 39 and perhaps even 38 being enough to secure a second season at this level. April looks to be the key month, and if Blackpool can stay out of the bottom three going into that month, ‘Pool fans have every reason to be hopeful with  those four consecutive home games.
Before I finish, you’ll notice that the title of this post suggests part one of a series. With plenty more twists and turns to come before the end of season, I’ll likely revisit this topic at least once, with a clearer picture emerging with each passing week. Expect an update sometime in April.